No Really, It's Okay to Vote Republican 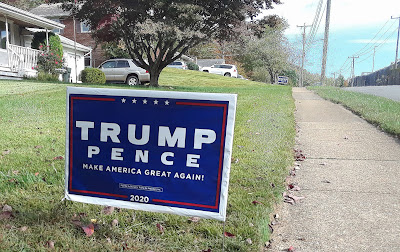 Some are likely on the fence - not for whom, but if they should.

Certainly fellow Americans are plentiful who will vehemently disagree with my titular hypothesis. And really, this will do absolutely nothing to persuade them. These days, conservatives who do not take pleasure in swaggering daily Trump-promoting social media posts maintain a keen disposition in the shadows, and for enticing reason. Certainly, there is no deficit of rationale for veering left in protest or even scheduling November 3rd to wash one's cat during the entirety of voting hours - both explicable decisions for justifiable ends. However, that could actually be a sacrifice which ought not be made in spite. As Thomas Sowell reasons, "I prefer a disaster to a catastrophe."

Yes, Trump is a master bloviator.

He is brash, thin-skinned, divisive, childish, of questionable moral character, and not entirely fluent with the truth. Yes, he has said things that should not be said. And yet there is something authentic about a man who has been asked over the years by Oprah Winfrey, David Letterman, and others about running for president, and he consistently replied that he believed that he could do a better job than the lifelong politicians and gave straight-forward thoughts as to how. While much of his current rhetoric can be better described as red meat to the base than authenticity, much of his record reflects the conspicuous businessman and celebrity we have known for decades. Donald Trump's goal is to win and to secure the accolade of great president. He knows to be successful in that endeavor, much like in business, that will take transcendent and tangible results. He once had a moment of self-reflection to say that maybe doing this job well is his last and only hope to get into Heaven. There could be worse motivations.

The greatest lie they tell may just be that your opinion is simply evil.

If you are old enough to remember, every Republican running for president this century has been called a fascist. The term has lost all meaning. Bush, McCain, Romney, and Trump have all had some comparison such as to Adolf Hitler. Yet in retrospect, at least Mrs. Obama's and Ellen's buddy, the politically moderate war hero, and the Mormon BLM marcher hardly have lived up to the hype. And so far, President Trump has been content to have immigrants and Jews working or even living in the White House. We are told that Republicans hate women, foreigners, homosexuals, Muslims and African-Americans. Liberal orthodoxy depends on these claims to survive. The venom for conservatives is so mainstream these days, it has become intrinsically hateful to have a public opinion about: life in the womb, the value of a mother and a father, fidelity to legal immigration, or the possibility that police officers don't systematically wake up every morning looking for Black men to murder. As if demonization of the outspoken was not enough, now even "silence is violence." Not to be conflated with the notion that evil only flourishes when good men do nothing, today reasonable challenges to popular opinion are detested, and failure to adhere to the vocally superior is itself a brutality.

Remember Minneapolis' Democrat Mayor Jacob Frey, who at a Black Lives Matter event refused to comply to abolish his police department... and was humiliated and forced off stage? The bullies are out, and they have no interest in rational discussion. Have you seen how Black conservatives like Candace Owens are treated - as race traitors? How destructively enabling it is for good and reasonable people to maintain silence because they know their opposing point of view will be automatically treated as hate speech. The Democrat Party thrives on the idea of oppression, yet liberation would be the death of their ideology. That party controlling all of government - including stacking the Supreme Court - would result in the degradation of America perhaps beyond our tipping point. Just think, what is the opposite of making America great again? A blue wave may tell.

Does anyone really believe Joe Biden's allegation that Donald Trump is responsible for one hundred percent of the American COVID-19 deaths? Meanwhile every other country on the planet also struggles with this pandemic. Never mind the lies people tell to get elected, truth in this country for many is simply not a priority. Refusing to bear false witness is not only a religious Commandment, but it is also necessary in preserving America. However, people are all too eager to promote viral fictions such as the story of the death of Michael Brown in Ferguson, or that a gang of pro-life high school kids surrounded and racistly taunted a helpless Native American man. We Americans have become way too willing to bear false witness with a single click if it supports what we believe politically. Governmental gridlock, racial animus, corruption, societal discord - these phenomena all predate our current president. They may actually be more a reflection of us than of one bad orange man. Truth may not be found in a successful politician, but for some reason it is easier to trust a wealthy man who took a pay cut to serve for 4-8 years, than a man who found himself - and family - wealthy while in office for half a century.

To vote is to matter.

Conservative theory is based on personal responsibility - the value of a virtuous citizenry necessarily recognizing and owning the gift of America. Beleaguered conservatives know this, but can often be uninspired, or even appalled, by the man Donald Trump. The truth that has become creepingly evident is that contemporary liberalism - for all its respectable ideals - is taking this country in the direction of: disdain for wealth and capitalism, weaponization of identity politics, permissiveness of anarchy, disregard for fiscal responsibility, contortion of truth and norms, rejection of American exceptionalism, and an unhealthy dependence on government.

Citizens of good will across this nation - from the CEO of Goya, to Kanye West, to the average conservative on Facebook - know too well how voicing right-wing opinions or even a compliment of the president can result in shaming and retribution. Elections both reflect and determine to large extent the character of our nation - even if that of the incumbent is not our greatest specimen - so conservatives should stand up and be heard.