Joe Biden Failed America and the World, and That Needs to Change 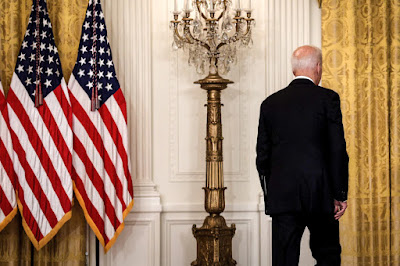 Imagine having given the 9/11 hijackers the keys to the planes and also locking the the doors of the World Trade Center and Pentagon with everyone inside. My fear as the 20th-year commemoration of that horrible day fast approaches is that our own president has committed an egregious and unthinkable offense of a similar magnitude. I pray every day that I will be proven wrong. However Joe Biden has not only foolishly and dangerously mismanaged the United States' withdrawal from Afghanistan, and he may very well have unwittingly stranded thousands of our fellow Americans as potential hostages in the process to the terrorist organization assuming power in our absence.

We must expect better of our president and administration who are meant to be among the best of us. This goes far beyond a political jab, and at this point there are many of different political persuasions who are rightly angry that President Biden either did not comprehend or did not care that he was creating perhaps the greatest catastrophe in American foreign policy history. He has either lied to us or been woefully unaware of reality. He is routinely confused or incoherent. He has placed Americans in grave danger and has consequently broken his solemn oath of office. We need a president who relies on more than knocking on wood to secure our survival.

The Taliban have been pledging some sort of tolerance as a smoke screen - likely to buy themselves time to consolidate power. Meanwhile they are going door to door initiating their persecution of Afghans disloyal to their objectives and forcing girls into slavery. These barbarians are killing and torturing in unimaginable ways. Concurrently, they have surrounded the Kabul airport and have made it either difficult or impossible for many to enter, seizing passports and documents. ISIS and Al Qaeda are reported to have resurfaced. At what point do our fellow citizens officially become hostages for a massive pay day... or worse? And now we have thousands of military personnel returned to Afghanistan who are far less secure after our recent hasty retreat. We should all pray this is not playing directly into the hopes for some Jihadi sabotage for the anniversary of September 11th - the day President Biden wanted for his political win of ending our Afghanistan operation.

We are left with no good options and a president who claims he executed this catastrophe with no mistakes. The buck, we are told, stops with him... right after it stops with President Trump, the (former) Afghan government, the (former) Afghan military, and the Afghan people who didn't want to leave. President Biden owns this completely, whether he understands that or not. The clock is ticking, and our options dwindle with each day. Whatever future beyond our control that awaits Afghanistan, now is not the time to surrender our honor to political expediency. Surrendering our will at this moment surrenders tens of thousands of our own people and those friendly to us. Our only option should be to rescue all Americans from Afghanistan and fulfill our commitment to those who face certain unspeakable horrors for allying with our cause.

My initial response to the revelation of what has happened - and what it portends - is that our president should resign, but what is more imperative is for him and his team to step up and lead - to be the America we have promised the world. If he cannot, he should not be our president; if we cannot, we will have abdicated our role in the world and profoundly changed the character of our country.