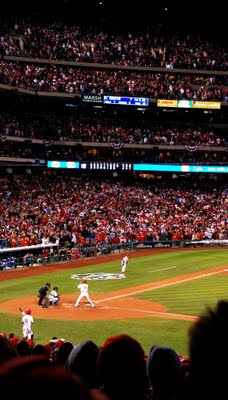 Evidently, I have a knack for showing up for big games, sporting my LA colors, when the home teams decide to stage awesome come-from-behind wins... Los Angeles NOT BEING THE HOME TEAM. See, I don't mind traveling alone... enjoy it, actually. However, when you are the only guy in a Lakers jersey in a Boston bar and the Celtics come back from a 30-point deficit, or you are the only guy among a silent 48,000 clapping for a Dodger home run, it gets a little lonely. Whoever said, "it's lonely at the top" should try going to a playoff game with me. Well, since I have chosen to explore minority status in highly charged sporting atmospheres as part my quest for international tranquility, I have found that a strong smile, a sense of humor, and some humility go a very long way. For instance, the girl to my left at the game last night in Philadelphia told me, in my blue cap, that I couldn't sit next to her because she had the swine flu. I told her I did too and offered her some of my garlic fries. Also, there were two rabid fans in standing room behind me who were intent on telling every Dodger - and the umpire - that they "suck!"... one at a time... all night long. In the silence that ensued after an inning-ending shoestring Manny Ramirez catch, I yelled satirically, "You suck Manny!" That got a few chuckles.

[Aside] So, Mr. President, (because of course he is a big fan of my blog) I have made no apologies for my home teams. In my experience, it has been more important to show people who you are rather than who you are not. Next stop - Mexico City with my US soccer jersey! Mmm... maybe not.