Alright, where were we... FOOD! Ah yes, I was on a mission to keep myself in the good graces of any Colombian reader of mine; let's be honest, I'm sure that number is in the low to mid hundreds of thousands at this point. I had the excellent fortune on Saturday evening to dine at Santissimo in Cartagena. Not only did I make the acquaintance of a charming Venezuelan family there, I had the nearly as exquisite opportunity to sample a local dish called obtalá with a fine Chilean cabernet sauvignon. On the menu, it is described as beef "punta de anca" which is sautéed and then stewed for two hours with vegetables and beef broth (tasted like some red wine in there, too). The trio of flavors of the stew, plátanos en tentación (soft cooked bananas), and arroz con coco (dark fried coconut rice) was amazing, and I savored every bite of the harmonizing flavors. I had ceased note-taking toward meal's end, but I had a delightfully simple yet unctuous vanilla ice cream with a local dark red berry with tough skins and large inedible seeds. The degree of difficulty in the required careful mastication was forgiveable. Mmm! The next day, I stopped by La Vitrola for lunch. I saw octopus carpaccio on the menu for the second time in as many days, so I decided it wasn't some drunken disgruntled German expat chef's idea of countering my boss's liberación de los pulpos, and may be just crazy enough to work (referring to carpaccio, not my chef; he works, right?). Bravo! It was thinly shaven octopus topped with parsley and diced tomatoes. On the side were fresh lime, a cruet of olive oil, pepper mill, and salt shaker... so I utilized them - delicious! So we're in business. 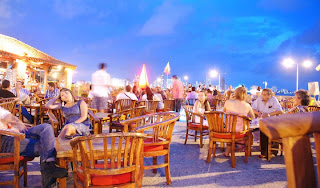