Since most reasonable Americans on the other side of the gay marriage debate are cautiously silent, at the risk of being branded all sorts of undesirable things, I feel the need to chime in. I have done a great deal of thinking on this issue and listened to a lot of people - friends, people in the media, priests - and you get the idea that it is a simple religion versus rights issue. I don't see it that way, and I hope you will have the open mind to follow me on this one.

First of all, there is more than one way to examine this, and all things should be considered. If you look at this from a religious perspective, it is certainly acceptable to have a belief structure of what partnership is and live your life accordingly. Hopefully, you will find someone with matching beliefs, and you can achieve a desirable way to celebrate your relationship. Perhaps you eschew religion altogether, in which case a religious argument for the design of family holds no weight at all, and that is fine too. We, as a country, have many beliefs about appropriate behavior and right and wrong, and our founding principles are such that these different beliefs are protected. While these beliefs inform and help us draw important conclusions, we need to move beyond religion, or the lack thereof, in deciding what is right and just in this case. It is a temptation to take the to-each-his-own approach, but I intend to show that this is an issue that affects more than the people seeking the marriage certificate.

From the rights perspective, we should consider that all Americans should be able to lawfully carry out their personal relationships with whom they please, and it should be none of the government's business whom they love and with whom they choose to spend their lives. Most Americans would agree to this point, and most, regardless of their comfort or morality level about homosexuality, do not care to legislate against sexual acts in the bedroom nor the lifetime partners one keeps. Now government does play a part in recognizing familial relationships, such as spouse, guardian, next of kin, etcetera, all for arguably legitimate reasons, so the premise that it's none of the government's business whom I marry is out the window. There was the proposal of civil unions that had some legs, but was leap-frogged by the all-out campaign by the gay marriage crowd. So, now we have states making up their own minds, but a country divided and no one really bringing anything new to the debate.

What's at stake here is the institution of marriage - which is quite important - and seemingly only simple arguments are being made to (not) solve a complex situation. The only way we solve this is to define marriage and find a way to agree to it, or else the institution is meaningless. What's interesting is that there has been a fundamental shift in thinking; marriage was once a cultural duty and sacramental gift, and now it seems to be viewed more as a right. The ultimate problem I have with this shift is that marriage used to be about family, community, and culture - a sphere of responsibility that extends beyond the individual - and now the issue is that of what two people want for themselves. What we need is a definition, but if the issue is the freedom to marry as you choose, why then should it not be legal to marry your sister or your five closest friends? Should marriage simply be treated as a private legal agreement that can be modified or nullified once a week? This all sounds ridiculous, but if you are going to change the definition of marriage, you're going to have to tell me what the new definition is, and you're going to have to get society to agree somehow. The bottom line is that marriage is not just what you want it to be, it's what it is culturally accepted to be.

Finally, and most importantly as it advises the decision on my view, is the issue of parenthood. If we are going to talk about individual rights in respect to a private family, how about a child's right to a father and a mother? Extreme cases such as abuse and neglect aside, the government may not deny a child his or her mother or father as a matter of legal status. We can then assume government has no general right to interrupt that natural bond. Why would we as a people choose to legally promote through gay marriage the denial of a child's right to either a mother or a father? Furthermore, by legally promoting a primary familiar unit of husband and husband, we are essentially saying, quite crassly, that MOTHERS ARE DISPENSABLE (and vise-versa with lesbian couples). Certainly a single parent can raise a child; so too, no doubt, can a same-sex couple - that is not the question. If the government is going to promote the general welfare of the people through family relationship legal recognition, it cannot destroy a child's right to at least an opportunity to have a mother and a father. This is why we recognize a legitimate marriage as a union between a man and a woman, not to deny civil rights because gayness makes us squeamish, but to keep intact a part of our culture that says men and women are not simply interchangeable with respect to family, and kids ideally benefit from having both a female mom and a male dad.

Some may criticize this decision as hateful, but it is quite contrarily out of love for children, and indeed, my country, that I say, let us not promote this insulting theory of dispensability. We must think outside of ourselves on this very important issue, as it will surely harm our national soul should we fail. 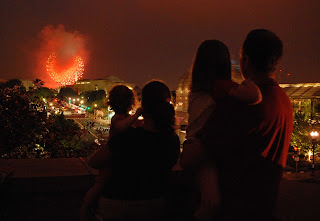