It is a morning flight, which generally means I'm still waking up. The air is not yet obnoxiously hot, as is sure to later be the case. We file into queue and make our way to the airplane across the tarmac. My fellow passengers have no faces, at least as far as I can see, which fails to disturb me, as my mind is preoccupied with thoughts of leaving, what I will be doing at my next destination, and of course following strict mental protocol for my boarding ritual.

FLIGHT ATTENDANT
Good morning, sir.(gestures for me to move swiftly to my seat)
Welcome aboard.


MARK
(pats the plane twice for good luck)
Salamat! (in the melodic way to which I have become accustomed)

I settle in my seat, trying to make sure I get everything where it is supposed to be stowed, almost narrowly achieving the goal of not spilling my coffee on myself or others in the process. It is comfortably cool in the cabin that is full by the time I look up to see if anyone else noticed that I just stained my shorts with hot coffee on two consecutive sips. I had some things on my mind, like the untimely death of my high school friend just days earlier and the wisdom of zigzagging around Asia just to make my way back to where I had already been (on a dwindling travel budget).

The mist shooting out from the ceiling looks eerily heavenly for the first time.

SAM PRACCHIA
(seated just to my left, shuffling excitedly, as if he had never flown before)

This is going to be a great flight! Don't you think?

This was an odd declaration for two reasons, 1) no one says that, and 2) Sam went to high school with me and hasn't been alive since the early to mid-'90s.
Looking curiously around the cabin now, I notice several other familiar faces.

Mark! (typically castigating for no apparent reason) I thought you'd be in Haiti... eating mud pies, but instead you're here in ASIA (emphasized as a subtle racist observation). Does someone here have a couch you can sleep on? What happened to your "artist's" apartment? Too many parties, or did they realize you're a waiter?

Yes, Don. They found me out. I didn't expect I'd see you here. Are you lost?

Oh, yes, like that time you set me up to compete with some of the best chefs in Washington?

The buns were perfect. I heard you singing at my funeral; I thought maybe you'd break out into a little Journey while you were at it...

I am suddenly jabbed in the ribs with two pointed fingers from two seats over to my left. It's the girl I met just a week before the beginning of Eighth Grade - a hyper sort with long curly hair and a wicked sense of humor.

Hey Mark! You sing Journey? Let's hear some. I didn't know you sing.

Usually only in a karaoke or otherwise protected private late-night setting. It was after your time. Can you keep your hands to yourself?

KENDRA MAY
(popping up from the seat behind)

Coach, how come you never sang for us? You just read us poems!

I'm not sure that would have been beneficial. I suppose you know the weather up ahead. Will we be landing on time today?

Light winds from the east, but overall, should be a smooth ride.

Across the aisle, one row up on my right, a young woman with long straight brown hair, and red lipstick turns around, pouring a glass of wine almost effortlessly.

Hey! Have a glass with me! (freckles, bright smile, and a playful confidence)  Well, a plastic cup, anyway. Cheers!

Don gestured to the floor - positioned discreetly yet obtainably next to his right foot on the floor was a bottle of cheap bourbon.

I'll take a glass of red wine! (my uncle enthusiastically proclaims from two or three rows up on the left)

Sam chuckles, and you can see the glee through his glasses at the prospect. I just then notice my grandma in the middle seat next to him, cradling a two day-old baby girl. Grandma turns just about 45 degrees so I can see her eye brilliant with happiness, but her attention is proudly focused on her first and only granddaughter who is delightedly comfortable and oddly doesn't even seem to know how to cry .

Curiously, I survey the rest of the aircraft in search of other familiar faces: my first high school football coach is up on the right, not really noticing me, as usual; Dr. Godfrey, Mr. Bonadiman, Mr. Tafflinger, Mr. Lopez, Mrs. Kilgore are all scattered throughout; Ty's mom, Phil's mom, and Kevin's mom all are seated together - having just met, become fast friends. Joan Doty seems to already know everybody.

Then, two or three rows up on the right aisle seat is a gentleman consolidating his plastic containers from the various in-flight meal items for himself and the two passengers to his right into a neat stack waiting to be collected. His hair is buzzed short, and he is wearing his favorite collared shirt and comfortable black sweatshorts. My dad, with alert, bright eyes, excited for the trip to come, turns to Sam.

Hey! I sure would like some of that wine too. Is that Burgundy? (the cheap jug wine, not the French appellation)

(Pam pours for both of them)

I thank you kindly! (stated with all the faculties of a healthy human adult male)

Sam and Dad clink their plastic cups and eagerly turn to face forward. Dad proceeds to chat it up with John Lehrack and Mr. Cisneros on his right. Sam shares a side-hug with Grandma.

(turns to me and nervously whispers, almost embarrassed that maybe she brought the wrong wine)

It's Bordeaux! Is that going to be okay??

Yeah, I think that'll be fine. It's good to see you again, Pam. I'm sorry we never got those Double-Doubles from In-N-Out like I offered.

Oh Mark, that's okay. I think I can get one where we're going.

I look out the window - all clouds, white, without a hint of blue - suddenly contemplating the prospective consequences of being on board a flight with all people who should no longer have a pulse. I'm a bit nervous, yet everyone around me couldn't have a care in the world. Not one frown nor one tear can be seen amongst this jovial crew of people who may have never met most of one another, but have some connection to my life. All are as happy as could be. Though I have missed many of them tremendously, I am pleased to see them getting on so well and so confident that their upcoming journey is cause for celebration.

As the cabin shakes, and I still see no sign of anything but clouds out the window, I tense up a bit, worrying that this ascent might not change trajectory and that I am the only one who doesn't remember dying.

Hey! Don't worry. We're dropping you off. You have a trip to finish. 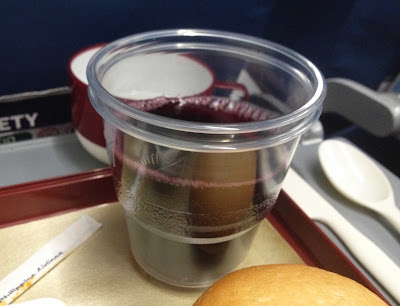