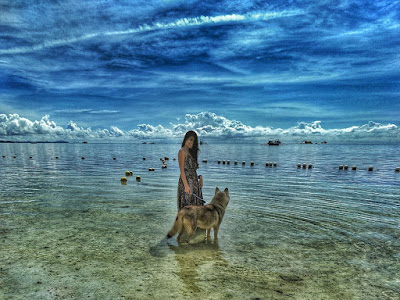 One of the greatest gifts in travel is meeting good and interesting new people. Especially while traveling abroad, exploring someone else's perspective and history is truly a worthwhile key to a journey.  I can't actually claim this person as a true friend; we never met, and our conversations were quite limited via social media after I learned of her plight. However, I feel compelled to share just a small slice of her story, since for some reason it intersected and resonated with mine. I didn't want this year to pass without remembering her.

Ella was a Filipino, a swimmer, a student, a wanderluster, a mother to a young daughter... and a fighter. Beyond that, I should not pretend to know much more about her, except that she only lived to see the age of 26. And we shared the same blood type. Perhaps she would not care to be remembered for her illness; I mean, who would? But I think, at least for the story my discoveries are meant to serve, it should be told that she found herself in a fight to survive a disease that ravaged her kidneys. This meant she needed to find a donor - her "bean voyage," she called it. How interesting that she saw a powerless plea for help to save her life as a voyage. Now that I think about it, perhaps that is what piqued my curiosity.

She fought, and people would say she "lost her battle," but do we all lose when we die?  To talk about life in terms of winning and losing is pretty odd. When we talk about major illness, it's always referred to as a "battle." War is a competition comprised of battles, but the reality is that participants historically don't do it as much to win but to survive (or so that others will survive). War for those who fight is less about choices than staring down an ugly reality and doing what you must. Maybe illness is the same. It found you, and you can either marshal all energies within yourself to try to overcome it, or you can accept your demise. Or maybe it's both. Human nature is to fight back; your body does it without you even thinking about it throughout your life. But is it fair to say that when every person dies, he or she is conquered? Death is not defeat - not of the human spirit anyway; it is merely proof that one has lived.

Usually there is some hope or possibility that you can win in other competitions. Marathons are different. Out of hundreds of contestants, there is only one winner, and really only a small handful who have any expectation of being able to win. As opposed to most other competitions, participating has nothing to do with actually winning, but of some individual sense of accomplishment. In fact, many marathon runners compete to improve on their personal best, while others strive for the sole purpose of finishing. Life has many parallels, however no one does it simply to finish. You could say many want to finish well, or make a significant accomplishment along the way. But finishing is inevitable - even early, finishing life should not be a defeat.

Why write in theory about the life of someone I never met, simply because she passed? She even wanted to pass on quietly, I'm told. But it should be known that she fought; she lived; she had hopes, and she struggled against incredible odds - relying on the potential kindness of strangers. Hopefully that voyage took her someplace beautiful. Hopefully strangers can be kind because she lived. Wouldn't that be something?

CHRONIC KIDNEY DISEASE HAS NO CURE AND A TRANSPLANT IS THE ONLY HOPE FOR MANY TO LIVE A LONG LIFE.

To be clear, the fact that we shared a blood type should not deceive you into thinking I did anything to help her other than offer words of encouragement. I did, however, visit the Chong Hua hospital in Cebu, where Ella underwent regular dialysis, with the hope of gaining information about donorship and possibly helping to spread her plight.
Posted by Mark at 1:15 PM