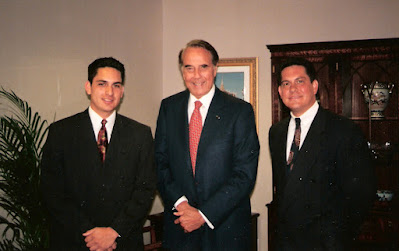 It was 1997 and DC was a very new place for me. Luckily I had my charcoal Pierre Cardin double-breasted suit among my scanty supply of possessions as a recent transplant from California when my older brother Tom, then a congressional staffer, called me and said, "hey, do you want to meet Bob Dole? Come downtown and wear a suit."

Bob Dole had recently retired from a lengthy career in the United States Senate and just lost the presidential election in 1996 to Bill Clinton but would remain active politically for two more decades as it turns out.

Tom briefed me ahead of time to shake his LEFT hand, as he had lost full function of his right arm having been injured in World War 2. We met and got our photos taken. Senator Dole was tall, engaging and pleasant. He spent a few minutes getting to know us, and I shook his hand as instructed. Looking back, it certainly has been one of the highlights of my journey here in Washington, DC (so far), and I am proud to have met such a statesman and American war hero.

While our visit was brief, it was an honor to meet you on the path. Thank you for your service and your time.