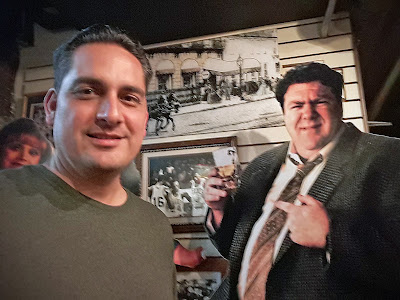 It's 9 o'clock on a Thursday evening and Norm walks into a bar. No one looks up from their phones nor shouts his name - not even Diane, the attractive but aloof and over-educated waitress closest to the door. He finds a seat at the bar. The bartender Sam pretends not to see him for nearly five minutes, wanders his way as a tease, then goes back to the end of the bar where his buddies are sitting. Woody is busy sawing a giant block of ice into smaller, still large, blocks of ice oblivious to anything else going on. Carla... is being Carla, only not funny - just unimpressed, loud and obnoxious. Cliff's incredulous stories are drowned out by the occasionally vulgar stylings of rap music, and Coach (I know he and Woody never worked together) doesn't speak much English, yet he is the most likeable, although least expected to take an order or make a drink in the establishment.

Something has happened to good service in America.

Recently we went to a breakfast restaurant and was quoted a 20-30 minute wait. I figured we would go across the parking lot to the store to kill the time. By the time we had noticed the text message and made it back to the restaurant we were told our table had been given away. The lady next to us had the same problem. I pointed out to the newest gentleman to arrive to book a table that he should not go too far as to risk having his given away as well. The host started laughing. Soon he taunted me to go outside and fight him.

I had been looking for some food in DC and remembered a spot known for their soul food take-out. The door was open, the lights were on, and some people were inside. A man quickly got in my face and shouted, "we (sic) closed!"

I had been looking forward to the first meal out since working on my birthday and then flying across the country. It was a well-respected seafood restaurant with a great view in Anchorage, Alaska. We were rushed through dinner, not even offered the dessert menu, and the staff busily and conspicuously broke down the dining room around us (we were on time for our reservation) to suggest we were no longer welcome.

These are just the most egregious examples that came to mind in three different parts of the country. However, if you eat out as much as I do, and not always at your town's Cheers, you may have noticed that service is not what it should be. Bartenders are more interested in their craft than they are of their patrons. Servers are aloof or outwardly uninterested in adding any kind of value to the experience. Issues are unresolved or just go unnoticed. And now you have to look at the menu on your phone and perhaps have no say in the tip that will be automatically added to your bill.

And before you ask, I'm not anti-hospitality (or COVID new norms necessarily); hospitality has been my life. And so have the new COVID norms.

I could be jaded by DC - which has some really terrible employees in all sectors - but I have noticed a trend of mediocrity over the years in a business that is meant to exist by making clients feel good. Many places get it right and are pleasant surprises as sporadic treats. It could be that I just know too much and it is easy not to meet my expectations. However, how many times do you actually feel cared for when you choose to pay to have people bring you food and drink?

The restaurant and bar businesses are hard, but it's not rocket science (I often wonder if rocket scientists say their job is not making dinner), but I have noticed a few things making it harder. Training is often unplanned and thoughtless. Managers have stopped being coaches and guides. Bartenders have stopped being bartenders - either dedicating all their energies to the mixology and/or not having ever developed the skill of conversation. The ubiquitous tip pool essentially guarantees your best servers are not making their potential and your worst and laziest are making more than they should. Customers have lost most of the traditional concept of table etiquette. But perhaps worst of all, in a business designed around caring, many actually care little about anything outside of themselves. In over two decades in the hospitality business, one constant is that there are employees who not only don't care but have contempt for those they serve. Likely that is true in other industries, but I always looked at the gratuity as some measure of thanksgiving that incentivized actually giving a damn. Hospitality is a social science; there is a lot to it, but its core curriculum recognizes that Norm is celebrated when he walks in that damn door and his beer is cold and waiting for him.