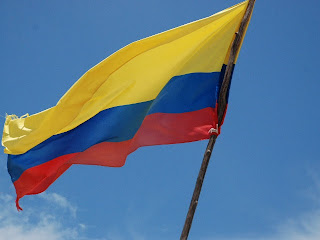 I know it´s still early, but 48 hours in traveling in Colombia, and I have yet to witness a kidnapping or come into any contact with any illegal drugs.  I am in the capital city of Bogota.  It is a huge modern city in a valley surrounded by lush green mountains.  So far I have only heard Shakira once (and Michael Jackson at least three times) but I will survive.  I arrived from Miami on Saturday, and was kindly greeted my my friend´s father, Señor Gonzales.  We went directly to eat at the local mall which had churrasco - a grilled steak with fried rice and banana.  Que rrrrico!  I met up with my friend´s cousin and about ten other friends, for unbeknownst to them what was to be my pre-birthday dinner at a ... of course... Spanish restaurant.  All of my new friends were very warm and kind, and there was a mix of them practicing english and me practicing spanish.  Through some miracle of modern technology, my friend in DC, Jaime, alerted my gracious dining partners that it was in fact my birthday eve.  Well, we celebrated.  There was much dancing, aguardiente, and even a cheesecake complete with candle and "Feliz Cumple" written in a berry sauce on the plate.  It was a great time. 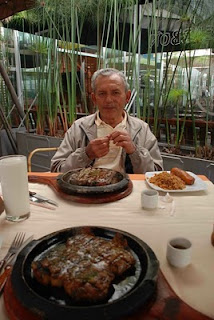 Yesterday, I spent some time with my new friends Silvana and Julio.  I toured the old part of the city where all of the government buildings are.  I saw an unexpectedly great collection of art, including works from Cesanne, Monet, Picasso, and a local favorite Botero!  Botero is from Medallin and paints and sculpts all fat things.  There is even a fat version of Mona Lisa and Adam & Eve... pretty interesante!  Nearby, there was a restaurant that advertises "el mejor ajiaco en todo el mundo", so we had to try it.  It was a chicken stew.  I might try to make it.  Later, we all met up for what was ostensibly "coffee", but was decidedly more aptly described as Aguila cerveza; hey, I´m just a guest here, so who am I to complain?
Posted by Mark at 12:39 PM