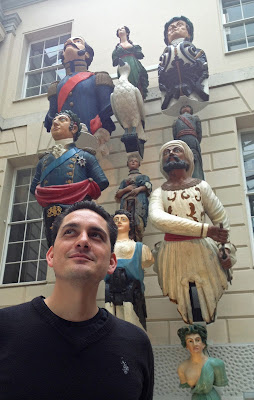 I was thinking about how strange it is for us to accept change. People are always saying, "change is good," but in my experience those are the same people who either are trying to convince themselves of it or those who are trying to impose change on you. Consider David Hasselhoff going into singing, Justin Timberlake taking up acting, or Paris Hilton... becoming a businesswoman; we're skeptical, and for good reason. I have already mentioned in an earlier post about how the entire cast of Grey's Anatomy breaking out into song one episode gave me the heebeegeebees. There is a certain transition that needs to take place in our minds from the known to the unknown. Hamlet struggled with this notion, as evident in his famous "To be or not to be..." soliloquy, and I believe it is quite a universal quandary (maybe not the whole suicide/death thing, but, you know).

Now, certain changes just happen - perhaps not spontaneously, however - due to unexpected (or even expected) variables, and there is nothing that can be done about it except accept the transition as truth. These changes are forced. Other changes are decided, planned, and executed. Oftentimes, these changes are more difficult.

I learned a lot from my time as a high school soccer coach. My determination was inspired by those girls and their potential for something great. Odds were that none of my junior varsity players would go on to play for the national team or have professional careers in the sport, so I made the focus of our training about learning how to win. Much of our discussions hinged upon a personal decision to reach our goals; I realized early on that girls and boys approach sports differently, yet this intrigued me as universal. One thing my players taught me was that it was impossible to force my will on them, whether it be to have a game face or to have a league championship be the only acceptable conclusion to the season. So, it became my duty to try to inspire the fundamental ability to change one's behaviors in a positive manner when on a quest for anything worth conquering. I gave a lot of advice from as young as eighteen years-old that I think, even at the time, would take a strong constitution to live up to - certainly stronger than I exemplified - yet I knew we were all on a mission to someday grow into the people we needed to become.

While change takes place constantly, for better or for worse, I think it is always important to recognize our capacity for it. Indeed some of the best changes occur when we confront our obstacles and decide to overcome them for some greater purpose. I am always thankful for those angels charged with inspiring such action, even when it is not pleasant.