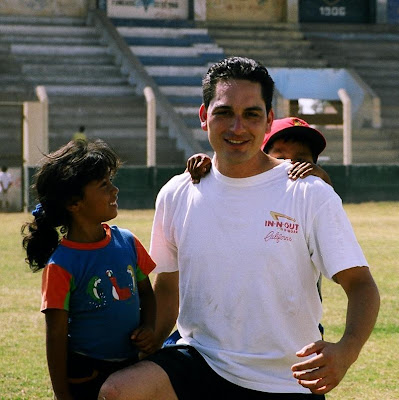 Today, after demolishing a huge wall (luckily, poorly constructed), two of us went to a daycare center to help out. "This should be good; I like kids." A boy insisted on playing chess, which I have no idea how to play, and I have no idea what he is trying to tell me, but I don´t think your first move can be some hopscotch eight places to capture my queen and some horse character. Eventually, I decided to move my smallest piece twelve spots, slaloming (?) to capture his horse, his king, and five other pieces. "¡Yo gano!" ("I win!") Ha, ha. Later, we played with the Jenga game, where I constructed a rather large cathedral. The boys were rather rambunctious and had insisted on ruining all of my creations. I had an uncomfortable moment when upon the destruction of said cathedral, I exclaimed "¡terremoto!" (earthquake!) [record halt - "eerruh..."] Made me feel a bit like the time when I was younger and at the dinner table with family and new Japanese exchange student, I commented on her being from Hiroshima with my best atomic bomb impression. Yeah... well, you know.
Posted by Mark at 7:17 PM