Pisco, not too sour 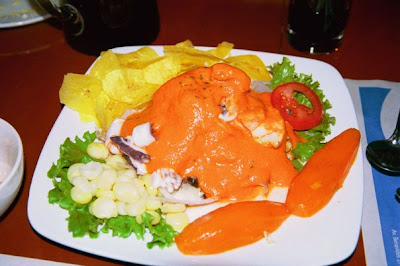 This is what I´ve been talking about. There are many types of ceviche. I think this had a mix of octopus, squid, fish, and a few other creatures. Mmmm.

Well, I am now at my featured destination - Pisco, Peru. We (it´s not uncommon for me to use ¨we¨when referring only to myself, but actually I´m with a lot of people) are south of Lima, by about four hours by bus, so basically you could ride your bike there in about an hour and a half. I thought the ride would be boring, but we got to watch (insert deep latino movie guy voice here) ¨Los Cuatro Fantastico!¨ and I lost all interest in looking out at the barren desert. The bus was large and quite modern, but I think built for little Peruvian people, so it was fairly cramped. It´s a good thing my airplane companions were not along for this ride. Oh yeah, they drop you off on the highway in Pisco, and you have to find a taxi or someone who claims to be a taxi to take you into town from there... lots of fun. 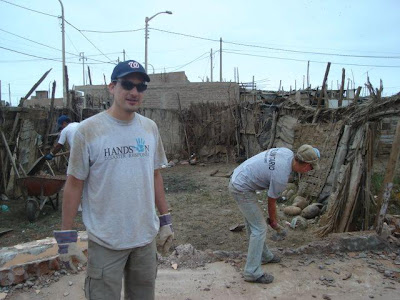 I have joined up with an organization called ¨Hands On Disaster Response¨ who has been in town since shortly after the earthquake last August. We have bunked up in what used to be a restaurant, now headquarters (damn Americans taking over everything), so of course I feel right at home since I live every other day of my life in a restaurant. However, whenever I sleep in one it is much less crowded and more food at my disposal. (Buca was great for that.) Anyway, they are involved with many different activities in Pisco and in neighboring Paracas and Ica. Today I shoveled rubble - lots and lots of large rocks, bricks, and dirt that had consumed this woman´s home. Luckily, we are about 300 yards from the ocean, so I would look out at the pier, feel the breeze, and pretend I was in Huntington Beach and not working and sweating for free. I was very bitter for the first several hours, thinking I could be in Italy right now... but no-o-o-o-o! And then I thought, ¨how strange, in the bottom half of the world the white English speaking people do all the manual labor for no disposable income while the brown people hang out all day.¨ Don´t be upset at ¨brown,¨you didn´t get upset over ¨white.¨ I will reiterate my feeling from last year´s trip that I still find it strange that on the southern part of the globe, I still haven´t fallen off yet. Anyway, my bitterness abated while walking back to base through town, and nearly every local smiled and thanked us.

In case you are keeping score, my group today consisted of 2 Brits, 2 Aussies, and 3 Americans, thank you very much.
Posted by Mark at 4:48 PM

very cool to read that you are down there to serve. what a sweet trip it will be!

i just found out yesterday that i'll be spending 3 weeks in argentina next may. im not sure on many details yet but all i know is that im leading a team of college students. can't wait. it'll be my first trip to south america. your blog makes me even more excited!