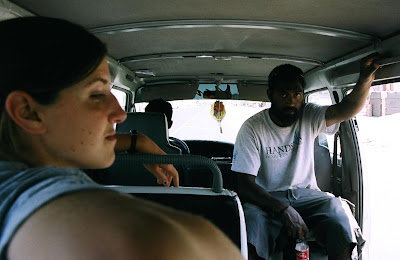 I mentioned earlier about working with an interesting group of volunteers. I would have liked to have more time to get to know some of them, but here are some highlights:

Lucas - He was the guy I always wanted to work with. He greeted every grueling job with a "yeaaaahhh!" as he pushed the wheel barrel out to the street at 8 AM. Lucas is Australian and doesn't wear shoes; rocks, broken glass, chaotic demolition situations don´t bother him... only bird droppings scared his weathered feet into captivity. What a fun guy to be around.

Neesh - The first person I met. Neesh is Canadian. He heard about the earthquake, and he bought his ticket to Peru. Neesh basically just showed up and looked for something to do to help. It turns out the UN was there with tents for the newly homeless residents. He started putting up tents.

Julia - I met Julia on my first day on the job walking out to the site. It turns out she is from

Virginia too. One night at the fire, she got out her guitar and shared her songs with us. She is a wonderful folk songwriter, and her music gave us some much needed entertainment in an otherwise uninspiring evening. Julia is great with kids, and I was amazed how she connected with them so well, when I just resulted to throwing them around and hoped they wouldn't break.

Elaine - I almost hate to mention that Elaine has only one leg, but I think it adds so much to how impressed I am with her. Absent that fact, she is intelligent, friendly, and hard-working. I believe she was doing work at the hospital, but she joined us with the rubble crew one day. Ordinarily, I´d think it extremely difficult to be effective on only one leg. I found it difficult enough on two. She helped interpret and dig a trench. Good woman.

Dee - Dee and I got along right away. It always helps me to have an outgoing friend. It turns out we are both in the restaurant business. We were fast friends, but what struck me was her big heart. She was even able to make friends with, and get invited to dinner with, some of the locals. The people of Pisco are lucky to have her.

[hrr-hrrrm] - I´m such a loser with names, but I think his is Carlos? There was a young gentleman, local Peruvian, I believe, who came to help. There were not many Peruvians on our crew. This guy spoke no English. He got cut up badly one day by an ugly piece of metal and kept working. He would even keep digging during our breaks sometimes. His countrymen are lucky to have him.

Marie - I mentioned earlier that I got stuck on cement-mixing duty one day. That afternoon really sucked until reinforcements arrived. Marie was one of them. She is such a fun person, the day got much better for me. First she insists on working in the cement with no shoes, then she gives herself a facial. It helps to have someone around to brighten your day. I´m sure the locals agree.

Diego - This guy is cool. He is from Argentina, had been living in New York working in the financial market, quit and decided to DRIVE back home. He has been on the road for a year and a half, heard about us, and joined us helping the people of Peru for a while. He probably has another six months left on his trip, but he has no schedule.

Leah - I really did not get to know her, nor did I work with her, except when she, Neesh, and I went to Paracas. She is from North Carolina and is one of the leaders in Pisco. She is obviously dedicated, not only to this project, but to helping others in general. She is fluent in Spanish, perhaps introspective unlike others I have mentioned, but nevertheless a great asset to those around her.

There are others, and there will be more. So many people signed up to do a lot of hard work with no expectation of gratuity. Like I told them the other night, I am very impressed.
Posted by Mark at 5:39 PM