All Roads Lead to Roam

Istanbul may just be the center of world civilization. It is where Europe meets Asia and where east meets west. IT'S HUGE, by the way, and it is ancient, vibrant, and enchanting. Istanbul is a sprawling metropolis that is home to nearly 14 million people. While the cityscape is dotted with huge mosques that belt out periodic songs on their loudspeakers with regularity, (I refrained from dancing) this is a liberal democracy inclusive of other religions and varying degrees of piety. Like I eluded to earlier - nothing is what it seems.

Istanbul is an ancient giant, rich with history. I remarked to a friend while visiting one of the city's many museums that a certain clock was older than my country. I quickly realized what a ridiculous statement that was, since just about everything in Istanbul is older than my county. That's an exaggeration, but many of the city's most prized artifacts go back not centuries, but millennia. I'm still rather in shock to have viewed David's sword (yes, that David), Moses' staff, and Mohammed's footprint. (We may have had Mohammed Ali's handprint at one of the Planet Hollywoods, but not quite as intriguing.) INCONCEIVABLE! They had mummies too, etc.

Culinarily, there is much cross-over, or shared tradition, between Turkey and Greece. How insightful of me to do a Greek/Turkish/Greek sandwich (sounds like an after-hours party at... nevermind) trip, when their cuisines are so related! And if you're just tuning in, my journeys are always, in addition to photographic, an exploration of food and beverage. This goes back to when I said we are more alike than different; evidently we all like pizza, meatballs, and fire- roasted meat on a stick... except you vegetarians - see "Greek Salad", but that's another entry for another day.

I hesitate to draw a conclusion about Turkey from a few days in Istanbul, but what I will say is what I've already said, which is it's amazing what you will find if you dare to explore... that, and any Turk who visits should never pay for a thing! Thank you, friends. Thank you. 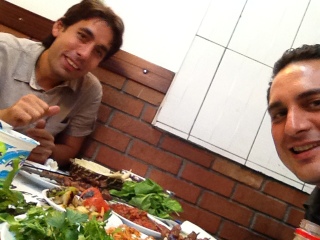